With our impending home ownership (closing in 3 days!), I’ve been itching to do some DIY.  Since we haven’t moved in yet, I have to focus on “non-painting the walls” activities.  After Purdue’s epic collapse against Ohio State last week (don’t even get me started on our failures this week), I decided to channel my anger into crafting.  I made an 8pm trip to Michaels for some wreath-making supplies.

Of course Pinterest is the source for all crafting inspiration these days.  My inspiration for a autumn wreath was from this pin:

So I purchased a grapevine wreath, some shiny ornaments, smaller little sparkly balls (AKA festive vase filler), and leaves.  I even found some sparkly pumpkins and gourds which were on clearance from Halloween!

When I first started to glue the ornaments on the wreath, Matt was skeptical.

That’s his skeptical face.  Or it could have been his “Anne, it’s midnight!  I’m tired!  Football is over!” face.  April just likes to use her dad’s bum as a pillow.

Anyway, after a bunch of hot gluing, here’s the final product!

I’m so pleased with it!  And even though you can’t see it very well, I love the sparkly orangey ribbon that I now have a giant spool of.  Just need to figure out what to do with it.

While I was getting my crafting on, I also made a Christmas wreath.  This one is based off of this pin: 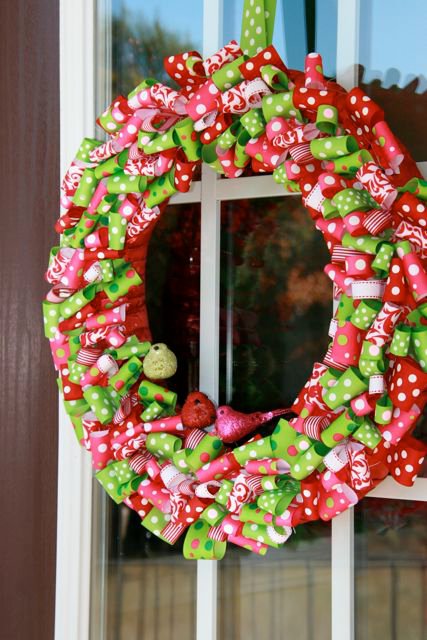 I bought a bunch of sparkly Christmas ribbon (there’s just something about sparkles) and a foam wreath.

First I wrapped the wreath in the red sparkle ribbon for a background and made a bunch of little fabric loops.

It turned out a little bit more regular than I wanted it to.  But considering I had a glue gun in one hand and a glass of wine in the other (Hey, I was mourning the loss of my football dignity), I think it looks superb!

Of course, I actually had a bunch of little fabric loops left.  So on Friday, I stopped by Joann’s to find a small wreath or something.  That’s where I found  them.  FOAM TREES!

Wouldn’t these guys look perfect with sparkly Christmas fabric loops?  Unfortunately, I only had enough to cover the small two.  But I think they look pretty festive (if not a bit chubby).

In lieu of an awkward point at the top of the tree that looked strange, I decided to abscond two of our Christmas ball ornaments to use as tree toppers.

There’s my adventure into crafting.   WOO HOO!  We’re ready to decorate our new house for the upcoming holidays!

Made anything fun lately?  Do you do crafts at midnight and then take pictures with awful lighting?